There are lots of ways we can engage groups in learning. This one just happens to be inherently equitable and just.

In our book, Unlocking the Magic of Facilitation, Meg Bolger and I use one of the chapters to try to disentangle a few ways educators commonly engage groups in learning: lecturing, teaching, and facilitation.

As nouns, they are a bit more rigid in their usage. We have clearer ideas of the archetypes of what a “lecturer,” “teacher,” and “facilitator” look like in our mind. The methods they use. Even their tone. But those archetypes are still not absolute. Teachers lecture. Lecturers facilitate. Facilitators teach.

But in writing the book, Meg and I saw merit in distinguishing between these words. In honing in on, and even augmenting, the distinct features exemplified by each of those methods.

What led us to focus on this was the simple truth that our book represented our best effort to channel the lessons we gleaned from training countless facilitators together. And one of the universally-important lessons was that when budding facilitators distinguished between lecturing, teaching, and facilitating; and they learned to see them as unique (but complementary) tools; that helped prepare them for a variety of sticky situations they would later encounter.

The manifest function was to help the educators realize they had three different tools in their belt, where before they might have only felt they had one.

And the fun part was that people didn’t need much coaching when it came to figuring out the differences, they just needed the prompt. We’d give them a big ass post-it (AKA flipchart paper, if you don’t like colorful language), write one of the words at the top (e.g., “Lecturing”), and then let them go to town.

But the latent function we discovered, really by accident, has felt even more important for me over the years, and it’s what I’m going to write about here.

Namely, we discovered how uniquely well-suited facilitation is for social justice, or any effort that we hope will advance the goals of social justice. And I can sum up what I mean in one simple graph.

After a dozen or so times of having groups distinguish between these methods, we noticed a few common trends. Among them were language describing the types of participation, and the levels of agency.

For participation, we noticed people using words like “active” or “passive,” to describe the different ways the educator (i.e., the one doing the lecturing, teaching, or facilitating) was showing up in the moment, contrasted against the learner (i.e., the one being lectured, taught, or facilitated).

And when it came to agency, our trainees kept honing in on the ways either the educator or learner held power (or didn’t) depending on the method being used.

Here’s what emerged, as a graph: 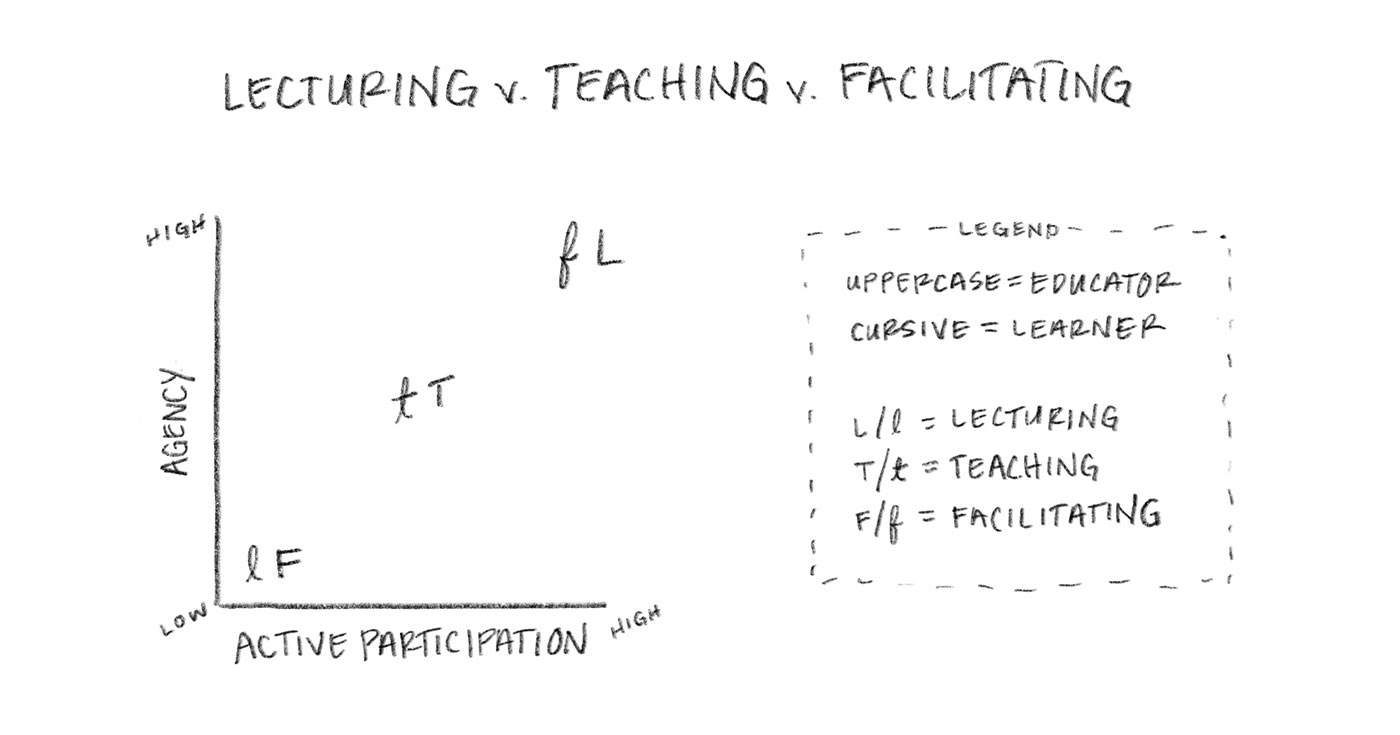 Along the Y axis, we’re looking at agency, from low to high. Who holds the power over what is being learned. And along the X axis, we’re measuring the amount of active participation.

Learners have the most agency during facilitation, where they are also expected to actively participate the most. Meanwhile, lecturing grants them almost no agency, and their role requires almost low-to-none active participation.

These themes came up again and again and again. And it’s one of those things, like so many things you learn when you’re facilitating, that seems obvious in hindsight. Of course that’s true.

And some other truths emerged as well.

Connected to the ideas of agency and participation, participants in our trainings, when we were disambiguating these words, would often use other phrases:

Hot diggity! That’s some heavy truth. “Do you agree?", I might ask you, but this post isn’t a facilitation, this is a lecture. So it really doesn’t matter whether you agree or not.

(I’m kidding – it totally matters, and that’s why I’ve opened up comments on these essays, and why I’m actually reading my emails – two things I am generally not enthusiastic about.)

For what it’s worth, I totally agree.

As a social justice educator, I’ve always been most drawn to facilitation as my method for engaging groups. It’s because of this that I’d often push for smaller groups when I was invited to do workshops at conferences (instead of asking for the big room, or seeing that as better, which is usually how workshop presenters value things). But I wouldn’t let group size limit me.

I’d even go so far as to facilitate groups of 5,000+ when I was invited to speak in large auditoriums. This required extra creativity, and depending on the gig, energy spent on back-and-forths with a frustrated A/V crew, but it all seemed worth the effort to me.

Every bit of facilitation I could add to something that otherwise would have been a lecture felt like the right approach. I didn’t have the above language to explain it, but I still knew it.

I knew that the best moments of social justice education I had participated in always happened during facilitation. Those moments when you’d “see the lightbulb turn on” in someone’s eyes, or break through a barrier and discover a new place you hadn’t seen before, or a different way of viewing something you’d seen a million times.

Facilitating social justice education is the opposite of that classic [parenting?] expression, “Do as I say, not as I do.”

While that idea might have traction in certain situations, it’s slippery in general. Because it requires people to see the steps someone else is taking, then take different steps, it’s far more risky than the opposite, which we might phrase simply as, “Do as I do.”

Walk where I’m walking. Do what I’m doing. Say what I’m saying.

If we view the one of the goals of social justice as creating equity, then working toward that goal by modeling inequitable relationships is creating one level of injustice in the name of dismantling another.

Even if it does work, it’s more work. It’s trickier. It requires learners to mentally hold more complexity – they have to “do as we say, not as we do” – while engaging with a subject that’s already really complex.

We make it easier when we can just say, “Do as I do.” And facilitation lets us say that.

But facilitation empowers us to take this idea a little further, yet.

“Do As I Say” is Fertile Ground for Dogmatic Tendencies

The other benefit of facilitation when it comes to advancing the goals of social justice is that it is inherently anti-dogmatic.

Every time you notice a dogmatic bent within a movement, organization, or system, I promise you’ll notice a few people saying, “This is the correct way,” and the majority being unable to question them.

Facilitation requires us to constantly ask, “Is this the correct way?” and then to listen to what the group says in response. If it’s not, we’ll probably figure it out quickly. And if it is, then there is likely no harm in continuing to do that thing.

Lecturing – or any other one-way communication – is perfect for advancing a dogmatic way of thinking about things because you don’t have to reconcile your inconsistencies, or provide evidence when people don’t agree, or even listen when people disagree.

And the more you can prevent others from talking among themselves, from figuring out they might actually disagree, the more heedlessly that dogma can advance. This is why authoritarianism is so tightly connected with shutting down organizing, or community in non-sanctioned ways.

If you want to check whether or not your group (your organization, company, movement, field of study, etc.) is dogmatic, facilitate things. Open the floor up to questions. Create channels of communication that allow everyone to talk to one another. Let the group decide what you focus on, or what’s important.

The dogma will rear its ugly head the minute it sniffs an inkling of power being transferred to the many, instead of the few. The tool of lecturing will start getting deployed by the members of the group upholding the dogma (as well as other tools, like excommunication, punishment, and silencing). Because if power is truly transferred to the many, the dogma won’t survive.

Embedded in that graph is another simple truth, one we all know in our guts: whoever is actively participating inevitably holds the power.

Democracy requires active participation from everyone (or as close to everyone as we can get). And the more people we have participating, the more democratic the process.

Meanwhile, Autocracy says, “Don’t worry about voting, friends. That would be so exhausting for you. Don’t even lift a finger. We’ve got this.”

When I started to connect all the dots, it became a thing I couldn’t unsee:

This is why, for the past several years, I’ve been so invested in helping people become better facilitators. It’s why I’ve written so much about facilitation, and allocate big chunks of my time to creating tools and resources for facilitators.

Even though some of those things might not have “social justice” in their name, I don’t distinguish the work I do to advance facilitation from any of the other justice advocacy work I do. I see them as one in the same.

I believe that every step we take to improve people’s ability to engage others in the process of facilitation is a step toward living social justice. And I won’t let you tell me otherwise.

Kidding. Please let me know if you think we’re going in the wrong direction. Maybe we can go around the circle and hear from everyone?

This post was originally published on Sam Killermann’s Blog.