What roles can live polling software play in a Zoom meeting? Turns out, a bunch!

For our second Brain Jam, Meg facilitated two Zoom sessions where we explored the live-polling software AhaSlides, coming up with ways it might help us clear our biggest virtual facilitation hurdles. I’m here to share some of the ideas I was most excited about.

As someone who had used Poll Everywhere a bunch, AhaSlides was an absolute delight. When Meg and I were talking about focusing on this tech for the second Brain Jam, I was sold as soon as I created my first poll question (which took about 10 seconds).

For me, whether or not I add AhaSlides to my virtual toolbelt is a matter of what tools from in-person trainings it would replace (as you know if you read my write-up about modifying in-person activities for virtual facilitation), and how easily I can orient participants to the tech.

If it does a great job of replacing a prop or process I relied on heavily in my in-person facilitation, and it’s easy for participants to use it, it’s a win in my book.

What’s the verdict for AhaSlides? I think you’ll be able to guess my vote by the end of this post. First I’ll do a brief recap of what happened in the Brain Jam, then share a few of my favorite ideas we came up with for using AhaSlides in our digital meetings.

As you know, because you’re a facilitator, watching a recording of a facilitation experience isn’t the same as participating. But we have the video below for your watching regardless And if you’re not a facilitator, how did you get past the guard?

What you’ll see if you watch that video, and the general flow of this week’s Brain Jam:

The video is a hodge-podge of both Brain Jams (one was on Tuesday, July 7th, and the other Thursday, July 9th), with only the large group time recorded. So you can see the fruits produced by the subcommittee discussions, but not the seed planting and germination. 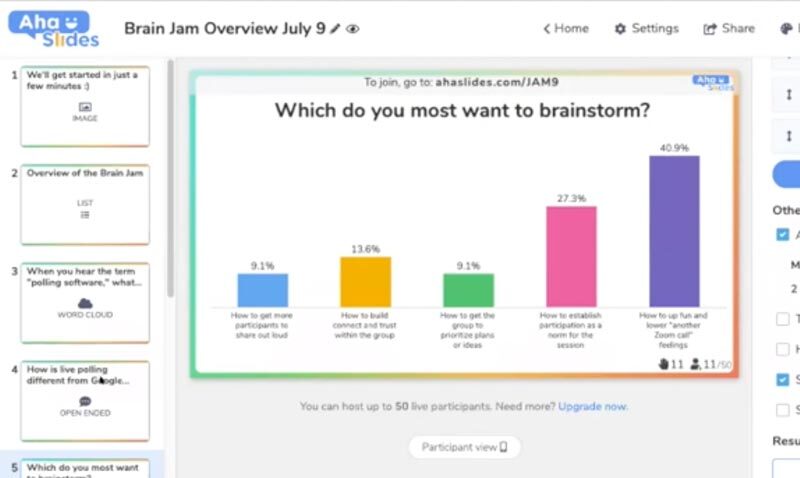 The virtual facilitation challenges we voted for (via AhaSlides, of course) were the following: 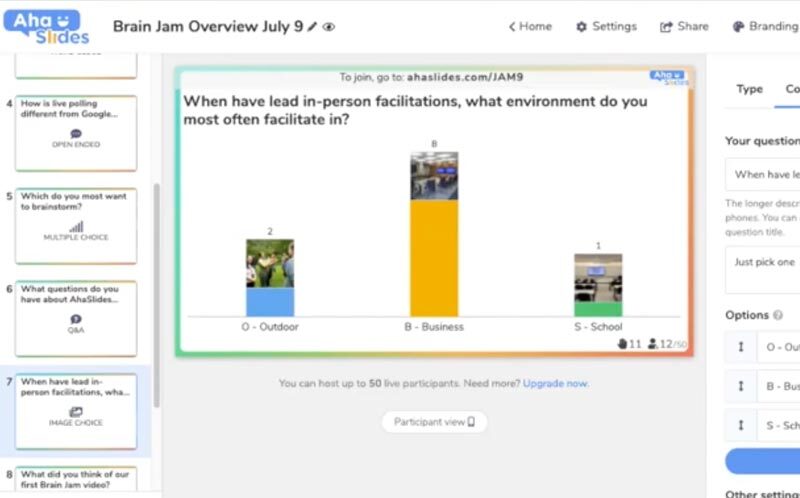 Our groups were broken up by the setting we have done most of our facilitation in, choosing among business (most of us), outdoor (second most), and school (smallest group — literally just me and Chewbacca during the second Brain Jam, and, not to call him out, but he’s never actually facilitated anything).

Alrighty, that’s enough context, I trust. Let’s get into the good stuff.

3 Ways to Use AhaSlides to Overcome Our Virtual Facilitation Challenges

Given the challenges we were focusing on, and the settings we do most of our facilitation in, I’ll highlight a few of the more creative implementations of AhaSlides discovered by the group.

Following are the ideas other facilitators created or shared that made me realize how perfectly this software is named as I kept thinking, “Aha!”

For an added treat, I’ve created an AhaSlides presentation that you can click through at your own pace that will give you a taste of each of these ideas firsthand.

Experience these examples as a participant at www.ahaslides.com/CANNEDJAM

Have you ever done an activity where you gave participants red, yellow, and green construction paper, then explained they’ll raise the color indicating their response to a prompt, emulating a traffic signal?

Turns out, you can do this easily in AhaSlides: 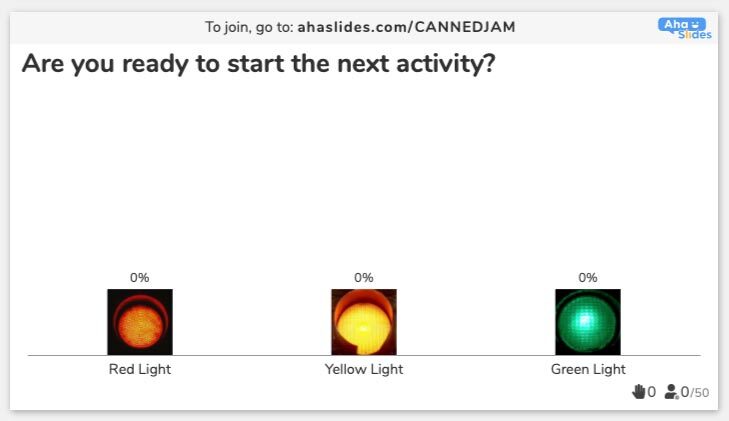 By creating an image choice question slide, with pictures as the options, you can check in with your entire group before proceeding in your facilitation. Easily, quickly, and — huge bonus over in-person meetings — entirely anonymously.

This slide came about in response to having participants do scavenger hunts around their houses during a Zoom call (e.g., “you have 2 minutes to go pick a dandelion!”), or Show & Tells (e.g., asking participants to hold an object up to their camera), and the difficulty of reading the room to know when people have completed the task.

You can also use it in a variety of other situations:

We discussed different ways you might use the information you collect here when you get something other than 100% green lights.

For example, you might use a lot of yellow light replies as a reason to do a quick break. “All the green lights, feel free to stretch, grab some water, or use the bathroom. Yellow lights, stick around and let me know what you need.”

If after a module, you check in with the group and see a lot of red and yellow lights, or not a lot of green lights, you might circle back and re-cover whatever you were just doing. After which, you can duplicate the traffic light slide (clearing the votes and starting with a blank slate) and have the group check in again.

What do you think? Does the Stoplight Slide idea make sense? You can vote here before we move on 😘

A lot of us have grown accustomed to start in-person facilitations with some sort of group agreement: What are we all going to commit to doing to make sure this time is well spent?

Using AhaSlides, you can elegantly do this in a way that is inviting, smile-inducing, and actually a little more seamless than it usually happens in-person. 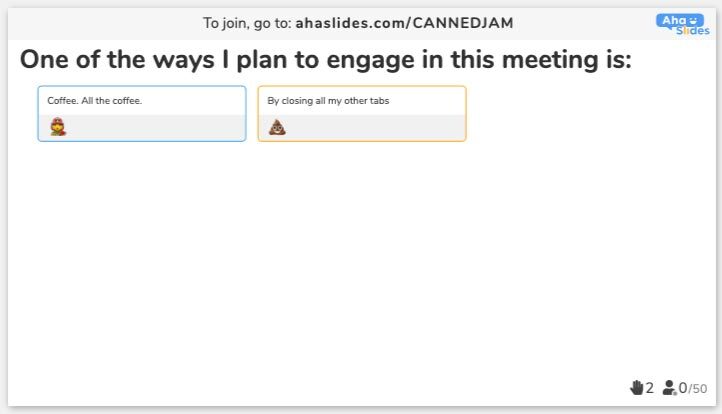 You can see this in action in the video recap of our Brain Jam, or check out the presentation view of our demo to see what your fellow blog readers have submitted.

Beyond participation promises, this question format – open-ended + enabling the emoji avatars — is something you can do to add a little fun to any type of input you want to collect from your group.

It’s also worth considering ways to add meaning with the emojis themselves. For example, if you had an open-ended slide with the prompt, “The main thing on my mind right now is:”, and enabled emoji avatars, you could add the clarification, “Include an emoji that shows how you feel about that.”

Consider the following three verbatim responses you might get to that question, and how dramatically different they feel based on the emoji:

I, for one, feel like that third one gives off big Yellow Light vibes.

Using Scales to See Who’s in the (Virtual) Room

If you’ve ever facilitated an activity where you have participants align themselves along a continuum, you might appreciate this virtual twist.

Leaning on an aspect of AhaSlides that keeps coming up, anonymity, you can figure out where your participants align on a given issue, and invite vulnerability without increasing the risk.

One of the small groups discussed that in a sex education space, it can be helpful to know what group identities or sexualities are present, represented by the participants themselves. If you were discussing the Kinsey Scale, for example, it might be elucidating to know where the group stood.

While we wouldn’t typically line up our participants and have them disclose their sexual orientation (for lots of reasons — too many to list here, really), an AhaSlides version of the Kinsey scale (with an easy opt out, anonymity, and clarity of instruction) presents a different opportunity.

Here’s the slide we demonstrated in the Brain Jam: 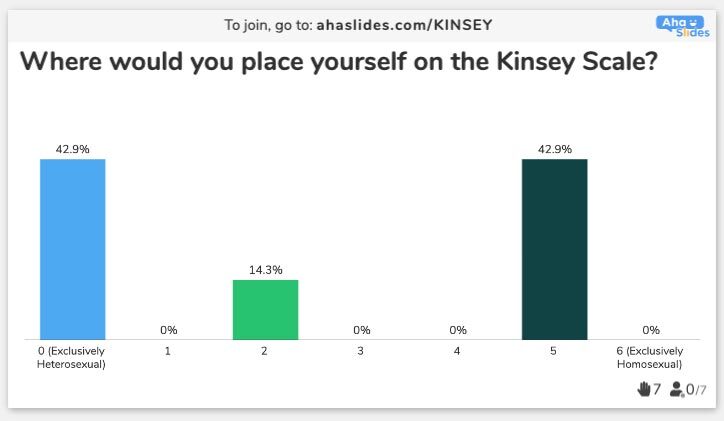 This same premise can be applied to a lot of other disclosures, creating spaces for vulnerability without risk, and getting a sense of where a group really stands on an issue.

Generally speaking, an AhaSlides question like this is perfect for gaining insight into things you otherwise wouldn’t know, could guess wrong about, or your group wouldn’t feel safe sharing.

And using what you uncover as a foundation for further discussion, exploration, or engagement throughout your virtual facilitation.

This one isn’t directly related to those challenges. And it didn’t come up in the Brain Jam, but as a result of us hosting it. That said, it’s sure to be helpful if you start using AhaSlides, and might spawn some new ideas for you.

One of the questions Meg asked had the potential for a split vote, so we needed a back-up plan. After talking it through, we realized how absolutely perfect AhaSlides is for facilitating the execution process vanishing options.

I wrote up an explanation of that on our Instagram, and you can click through it below:

One of the things we realized during the Brain Jam was how flexible the AhaSlides poll types are. They’re really great for what they’re for, obviously, but they can also be easily hacked to do entirely different things.

Using the Q&A Slide Type, for example, lends itself really well to creating an open agenda for your meeting.

Simply ask everyone to submit the agenda items they want to have covered in this meeting, delete the duplicates as the facilitator, and voila: You’ve co-created a living agenda that everyone can view, the facilitator can check things off as they’re covered, and you can add new “Parking Lot” type things as they come up. 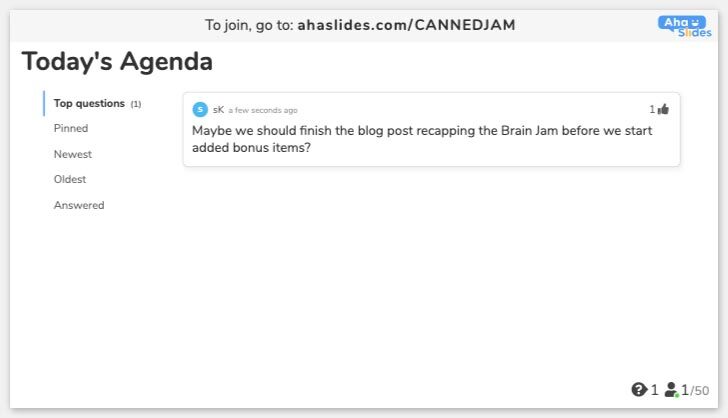 Even better, do you see the little thumbs up icon on the question?

Using this method to create an open agenda also allows your participants to help prioritize the items you should cover by voting on the things they want to spend time on.

(You can vote on that example if you’ve been following along in the presentation view of this AhaSlides deck.)

My Vote? AhaSlides is a Great Way to Invite Participation in Virtual Facilitation

The examples above, and what we got to in the Brain Jam more broadly, are the tip of the iceberg here. After dabbling in AhaSlides a bit, I can confidently say this is a wonderful tool to complement virtual facilitation on Zoom.

The obvious use cases that come to mind when you think “live polling” are execution processes, where you’re trying to make a decision with collective input.

But what really started to shine, and was remarked on several times during the Brain Jam, was how much fun it is to use AhaSlides to collect all kinds of input: from creative suggestions and ideas, to emotional shares and personal disclosures, to clarification and group check-in on process or understanding.

If you’re struggling in your virtual facilitations in similar ways to how we are — hoping to make participation a norm, invite vulnerability, or up the fun level of your Zoom calls — give AhaSlides a try.

As soon as you start poking around the backend, I bet it’ll be lightbulb after lightbulb of ways this tool can help you. And if that’s the case, please tell us about the ideas you’re most excited about! Maybe we can add to this list, or do a follow-up.

Oh, and full (non-)disclosure: this Brain Jam / blog post was not sponsored by or affiliated with AhaSlides in any way; AhaSlides is just a cool technology that we were excited to learn about, and thought you all might benefit from learning about as well.